The Belle Époque: A Cultural History, Paris and Beyond (European Perspectives: A Series in Social Thought and Cultural Criticism) 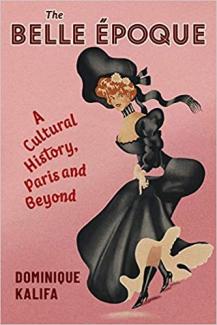 Dominique Kalifa’s “untold” history of the Belle Époque offers a probing reflection on the concepts through which we structure and give meaning to time and the past. Scholars of memory, nostalgia, and temporality will find much to think about in a book that is at once playful and ambitious. -- Stéphane Gerson, author of Disaster Falls: A Family Story

In this important book, Dominique Kalifa convincingly demonstrates that the notion of the Belle Époque was not constructed in the years that followed the supreme catastrophe of World War I, but rather in the 1950s, during the “Thirty Glorious Years” when the new France emerged. This fascinating study has much to tell Anglophone readers about the France that the British and Americans began to discover in the wake of World War II. -- John Merriman, author of Ballad of the Anarchist Bandits: The Crime Spree That Gripped Belle Époque Paris

Kalifa masterfully unearths the varied uses to which the term ‘Belle Époque’ has been put from the turn of the twentieth century forward. Part historical excavation, part meditation on the historian’s craft, this book makes a crucial contribution to the history of this important period and its afterlives. -- Willa Z. Silverman, author of The New Bibliopolis: French Book Collectors and the Culture of Print, 1880–1914

American readers, especially those who came of age after World War II, will quickly call up Toulouse-Lautrec posters on their walls and memories of first touring Paris. Kalifa gives those memories historical footings and explains their origins, providing a useful, informative portrait for scholars and Francophiles alike. ― Kirkus Reviews